Minty's Menagerie After all, it's just a ride….

Spare a lonely, moonlit moor set howl for the poor old movie mongrel The Wolfman. He’s kind of a second tier monster isn’t he? When you think of the old classic creatures of yesteryear the first images that spring to mind are the bolt-necked lumbering mannequin of Frankenstein, the cape draped festering & leeching royalty of the Count, or the tattered oriental shrouds of The Mummy isn’t it? Nevertheless the old dog caused quite a stir when he first snarled through screens back in 1941, with The Wolfman proving the first of a five film litter, with horror hero Lon Chaney Jr. continuing his father’s proud history of make-up and special effects sorcery to conjure another iconic figure in the annals of atrocities. One of the major attractions of these seasons I conduct is the modicum of research they require, as I was rather shocked to learn that this wasn’t the first iteration of the lycanthropic beast to appear on-screen, and in fact Universal had produced a picture known as Werewolf of London back in 1935 which I’ve never seen, and that alone means that I’ve learnt something new – this old dogs been thrown a new bone. Six years later this film set up the treatment of the monster for decades to come, a legandarium complete with silver bullets, moon initiated transformations, pentacle pointed protections and charms which were not lifted from popular myth and memory, but largely the invention of screenwriter Curt Siodmak’s fevered imagination. Such was the cultural import of these fabrications  these designs which went on to infect novels, comic books, TV and just about every other form of media, all the way up to the present day with the likes of Tru Blood and Hemlock Grove. If the zombie is horror’s comment on blind, ravenous consumerism of the bourgeois class and the vampire is the elite upper scions literally feeding on the blood of the masses for their exalted position, then The Wolfman  has to be your working class joe, the blue-collar guy who is transformed once a month (presumably when his pay-check comes in) into an intoxicated and ravenous violent beast, taking that oppressed rage out on his family and friends at his inferior status, a bruised animal raging impotently at his reduced lot in life. Well, he’s either that, or just a guy who turns into a wolf under the gaze of a full moon ’cause of some occult curse….. 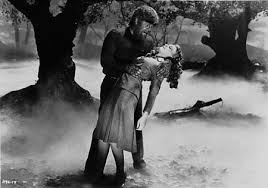 The hirsutely accursed Larry Talbot (Lon Chaney Jr.) is beckoned back to his ancestral home in Llanwelly, Wales (told you it was a horror story) after hearing of the tragic death of his younger brother in a hunting accident. Previously estranged from his father, Sir John Talbot (Claude Rains) Larry slowly makes amends for his absence, and decides to hang around the old place and retain some bearing in his life. Like a dog in heat, and despite the gloomy circumstances Larry soon becomes interested  in a local broad named Gwen Conliffe (Evelyn Ankers) who runs the village’s modest antique shop. Adopting a silver-fox persona Larry purchases a silver-tipped walking stick decorated with a wolf motif, a subtle sign of his virile ferocity which doesn’t quite throughly seduce Gwen, although it does seem to pique her interest in this mysterious stranger. Some gypsy types stroll into town and whisper urgently of the legend of the werewolf, the legendary lychanthrope which changes man into canine beast at certain preordained peaks of the lunar cycle, as Gwen’s friend Jenny (Fay Helm) has her fortune read by the inscrutable Maleva (Maria Ouspenskaya). Fate intervenes that evening when Larry is bitten by a big bad wolf that he repels from devouring  poor Jenny out in the moors, and although he slays the creature with his new cocky walking cane the bad news is the wolf was actually Bela, son of the gypsy fortune-teller.  She warns Talbot that he is now cursed to undergo the same lupine initiated terror, placing the whole village at risk including his beloved Gwen who is looking increasingly tasty…. 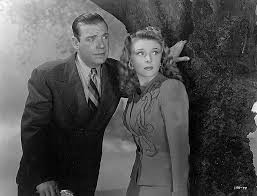 The film is a weird mongrel of old and young, with scenes of 1940’s upper class gentry mating roughly with 19th century Romany posturing and spooky medieval proclamations, contemporary motor cars prowling through the Welsh village as horse-drawn carriages lurch murkily through mist drenched steppes. It’s really only in these scenes that the film comes alive, that glorious expressionist lighting and claw twisted vegetation design creating a genuine moody menace, as quite frankly the rest of the picture away from the broad horror trappings  is rather laborious and sleepy. I always make this point but I’ll make it again with the rugged obedience of a panting labrador, yes the SFX have inevitably dated and the Lap dissolve technique – freezing the camera and taking another exposure repeatedly over ten hours as the make-up is applied to Chaney, so when the film is cranked back at 24 frames per second the transformation occurs over a period of twenty or so seconds – doesn’t quite equal the expertise of 2010’s Wolfman reading, but this earlier breed pants with an exhausted eerie atmosphere of misty moors and infected blood lines, of man submitting to his savage submerged spirit. Claude Rains is always watchable as the Van Helsing type of mature expert in all matters of the occult and uncanny, and given his connection as the Wolfman’s father in the picture it’s just occurred to me that this film might be harbouring a rather interesting subtext now that I think of it…..

With all the best will in the world Chaney Jr. is not the worlds greatest actor, it must have been very difficult to step into his fathers enormous ‘Man of a Thousand Faces’ shoes but he did manage to carve himself a little morsel of Hollywood history, not quite in the same monster movie league as Lugosi or Karloff but genre fans appreciate any actor who managed to play Dracula, The Wolfman and The Mummy at one point in his booze sodden career. Like so many stars of the era the man was afflicted with a terrible drink problem, culled in part possibly from his fathers treatment of him which included informing him throughout his youth that his mother was dead (she wasn’t, he wrestled custody from her and locked her out of their lives) and his fierce resistance to his son following him into the acting game (through either love at the harsh business or a misplaced sense of competition) must have boiled a seething cauldron of psychological distress in Junior’s mind. It’s some small consolation of his memory that he was one of those self loathing drunks who internalized his rage and shame, rather than strike out and cause pain to his friends and family, as all agreed that he was a gentle hulk of a man, even if he could be incapacitated from working by late afternoon during his darkest days. So this gives us a film with Chaney Jr. in his iconic make-up role, in which he is transformed by independent forces into a slavering force of violent nature, and is finally beaten to death by his estranged father in order to eliminate the hereditary curse – paging Dr. Freud. As with the rest of the Blu-Ray set the doggy treats are generous, including documentaries on Chaney Jr., make-up genius Jack Pierce and the movie cycle in general hosted by John American Werewolf Landis, plus an illuminating commentary from film historian Tom Weaver to round-out the pack. So now we’ve put this mangy old cur out of its misery its time to stop slumming it with these disgusting stinking working class plebs, if you’d care to join me I suggest we waltz off to the opera….

This entry was posted on February 25, 2014 by mintyblonde. It was filed under Art, Film, Horror and was tagged with Cinema, Film, Horror, monster, Movies, Universal, Wolfman.